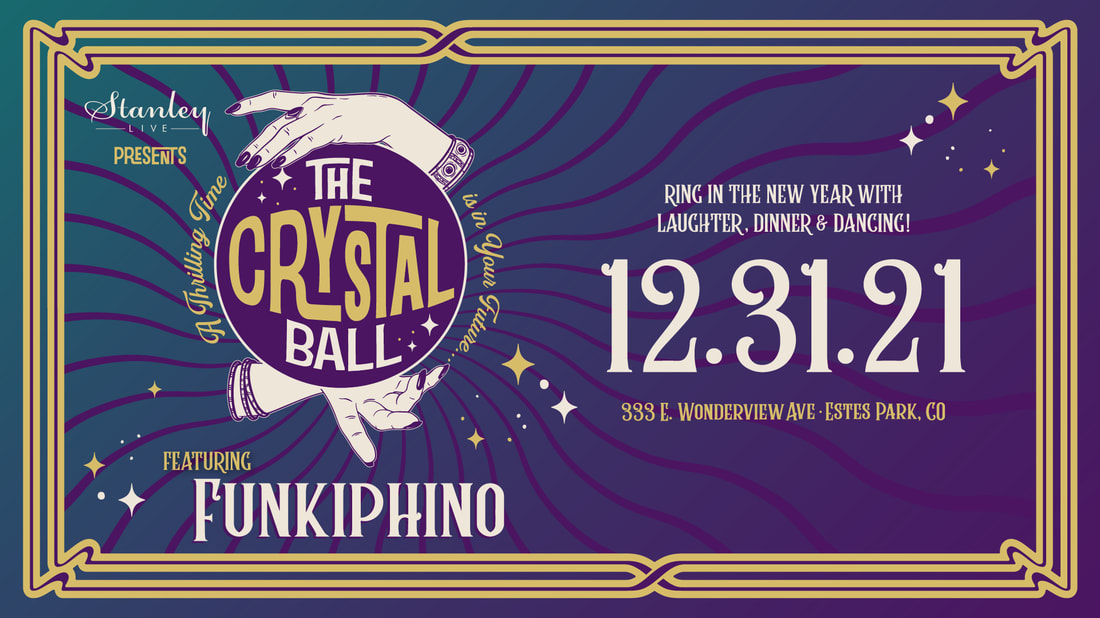 The Stanley Hotel cordially invites you to celebrate the new year with us at The Crystal Ball!
Join us on Friday, December 31 for a night of laughter and dancing as we celebrate the beginning of 2022.

Start off New Year’s Eve with a three-course dinner and a comedy show with Adam Clayton-Holland in the historic MacGregor Ballroom.

“Adam Cayton-Holland is a national touring comedian who was named one of 25 “Comics to Watch” by Esquire Magazine and one of “10 Comics to Watch” by Variety. Along with his cohorts in The Grawlix, he created, wrote and starred in Those Who Can’t, which aired for three seasons on truTV. The Grawlix also host a podcast, The Grawlix Saves the World. Adam has four albums all available on iTunes - I Don’t Know If I Happy, Backyards, Adam Cayton-Holland Performs His Signature Bits, and his most recent album Semblance of Normalcy.”

After dinner, join us in The Concert Hall with live music from the funk masters, “Funkiphino.”

“In 2005, Funkiphino was the band of choice for the 55th Presidential Inaugural Ball in Washington, DC. The band’s excellence has earned them nominations and spots as Best Funk Band from Westword Magazine and Marquee Magazine, as well as being the “go-to” band for the Denver Broncos Association and government officials.”
Prices:
$225 Full Package: Dinner, Comedy Show & Concert
$95 Concert Tickets Only